Boone, N.C. — Sometimes in life, things come full circle. Richard Sparks, a two-time graduate of Appalachian State University who holds a bachelor’s degree in health care management (1976) and an MBA (1978), has always enjoyed teaching. In fact, he had hoped he could return once again to Appalachian to teach after his retirement from Appalachian Regional Healthcare System (ARHS). However, he had not planned to come back so quickly.

In December of 2016, Dr. Heather Norris, Dean of the Walker College of Business, contacted Sparks and asked him to take over former Appalachian Chancellor Kenneth Peacock’s International Leadership and Ethics graduate class, since Dr. Peacock was retiring in January 2017. Sparks had long ago set his retirement date for January 26, 2017 and he had also planned a trip to celebrate his 40 years in health care. His love of Appalachian and his desire to teach proved to be too tempting to pass up.

Sparks did retire as planned, and he did go on his sailboat cruise. However, he immediately began teaching upon his return. So much for a long retirement!

Teaching was not new to Sparks, as he had taught part-time at Appalachian in the ‘80s, but due to increasing obligations in his role as President of ARHS, he had to give it up. According to Sparks, teaching this time around is quite different, “I wasn’t sure I was doing the right thing or doing it the right way. I had to learn AsULearn and I had no idea everything was all done electronically. I’m learning along with my students. In fact, my students are the ones who are teaching me and because of their help, I’m now an expert!”

Sparks reflected on a very heartwarming moment as his first class of graduate students attended commencement, “After leaving a 40-year career and numerous awards that also have a special place in my heart, it was a moment at graduation that touched me the most. Upon my exit, my students gave me a standing ovation!” If Sparks ever had a doubt about the impact of his teachings, that ovation reaffirmed that he was indeed “doing the right thing and doing it the right way.” 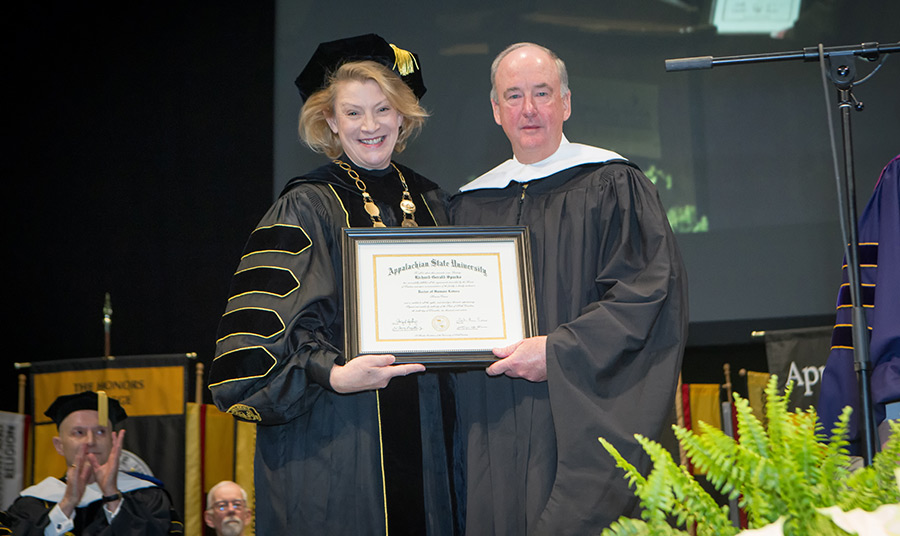 Chancellor Sheri N. Everts of Appalachian State University with Richard G. Sparks, who received an honorary Doctor of Humane Letters degree during Fall Commencement December 10, 2016, for his service to the community. Photo by Marie Freeman.

Sparks has always been a leader, whether in the classroom or in the boardroom. It was his leadership that helped steer the Beaver College of Health Sciences (BCHS) and ARHS partnership through the years. Sparks had this to say about the significance of the partnership and the impact of the new Leon Levine Hall of Health Sciences building for BCHS, “I’ve always thought that Appalachian’s popularity might be a great draw for recruiting nurses, clinical support and administrative staff to our area, and it would take a unique partnership between the hospital system and the university to do so. Led by Chancellor Peacock and through the efforts of a strong team at the university, the BCHS was established and the decision was made to build the new building on land adjoining the hospital. The land was donated by ARHS to the university. This was particularly fitting, because although there are a few people who still remember this; it was the university that brought the hospital into being for this community in the 1930s. (Note: Watauga Hospital, originally housed inside Founders Hall on Appalachian’s campus, opened its doors as the first hospital in Boone on April 17, 1938.) It’s now time for the hospital to repay that gift by partnering with the university once again, this time to create a place for health and educational opportunities. The beauty of this relationship is that Appalachian and the BCHS will be an incredible draw for the best and the brightest students in health care. Many of these students will remain here and enrich Western North Carolina as top quality health care professionals.”

As we move from managing health care to managing health populations, the partnership between BCHS and ARHS will become an increasing priority. Sparks offered his thoughts on our continued progress, “When all of this comes together, if you want to be in healthcare, then the Beaver College of Health Sciences will be where you want to be.”

Sparks returned to teaching in order to pass on the knowledge he had gained as the CEO of a healthcare system. Like Sparks, but on a broader scale, the Beaver College of Health Sciences will be educating the next generation of healthcare professionals. The students’ experience will focus on sustainable health through an innovative academic and interprofessional clinical experience. After almost 100 years, the relationship between the university and the hospital is renewed. The purpose is the same: improving the quality of life in our community and beyond. Full circle. 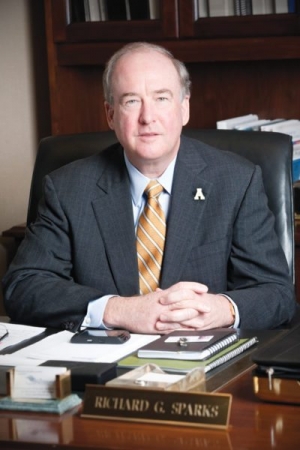 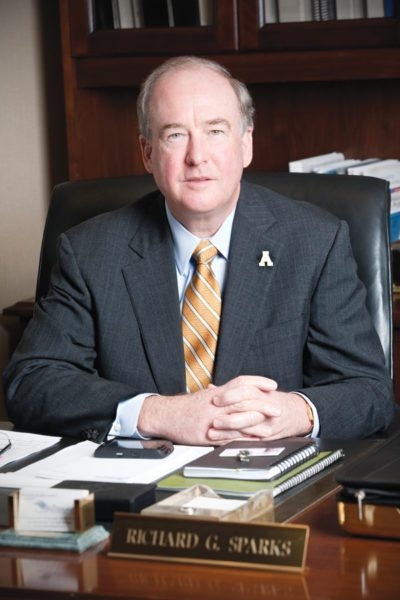